Set in the long settled Galactic Union, BLACKFIRE is  the first book in high-stakes science fiction/fantasy epic that combines Firefly and Dune, with a healthy dose of Sicario; all in the vein of Joe Abercrombie and Lee Child.

Celia Vickers graduates from a military academy a semester early to join an off-world archeology dig before she follows in her [Admiral] Father’s footsteps. Caught in the center of a global catastrophe that destroys the Galactic Union capitol, she and her fellow cadets discover an unconscious man. Rather than submit to the militant Universal Church, they heed her father’s last words and escape amidst a growing series of inexplicable events that defy known science. They journey across the galaxy searching for the cause, who’s after them, and if this mysterious man is the solution or source to a future galactic disaster.

I am the co-founder of the Mountain Writers Wrant writing group in Asheville, NC and the founder of the Big Story Podcast, on Apple Podcasts, Facebook, and YouTube. I spent many years as a writer and penciller for Marvel, DC, and Dark Horse Comics, then twice as many years working as an art director and designer before I ventured into the world of prose to tell the stories I need to.

Thank you to everyone who showed interest in my writing and fundraising effort for Clarion West this year. They're an amazing organization that supports underserved voices in speculative fiction.
Check out and consider supporting Clarion West >

Thank you! Your submission has been received!
Oops! Something went wrong while submitting the form.

One of my Clarion West Write-a-thon Group Stretch Goal's was to produce sketches of story characters and items. 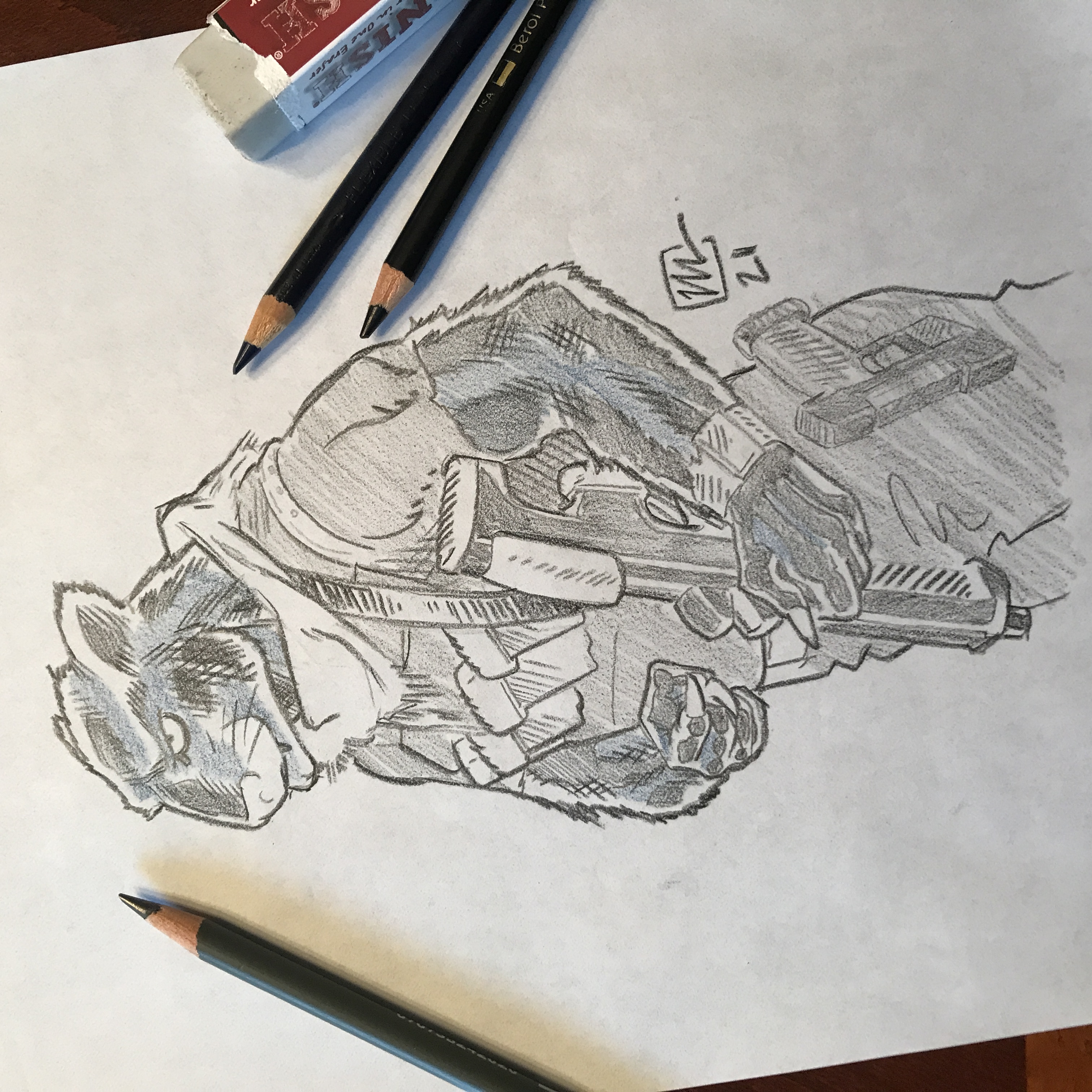 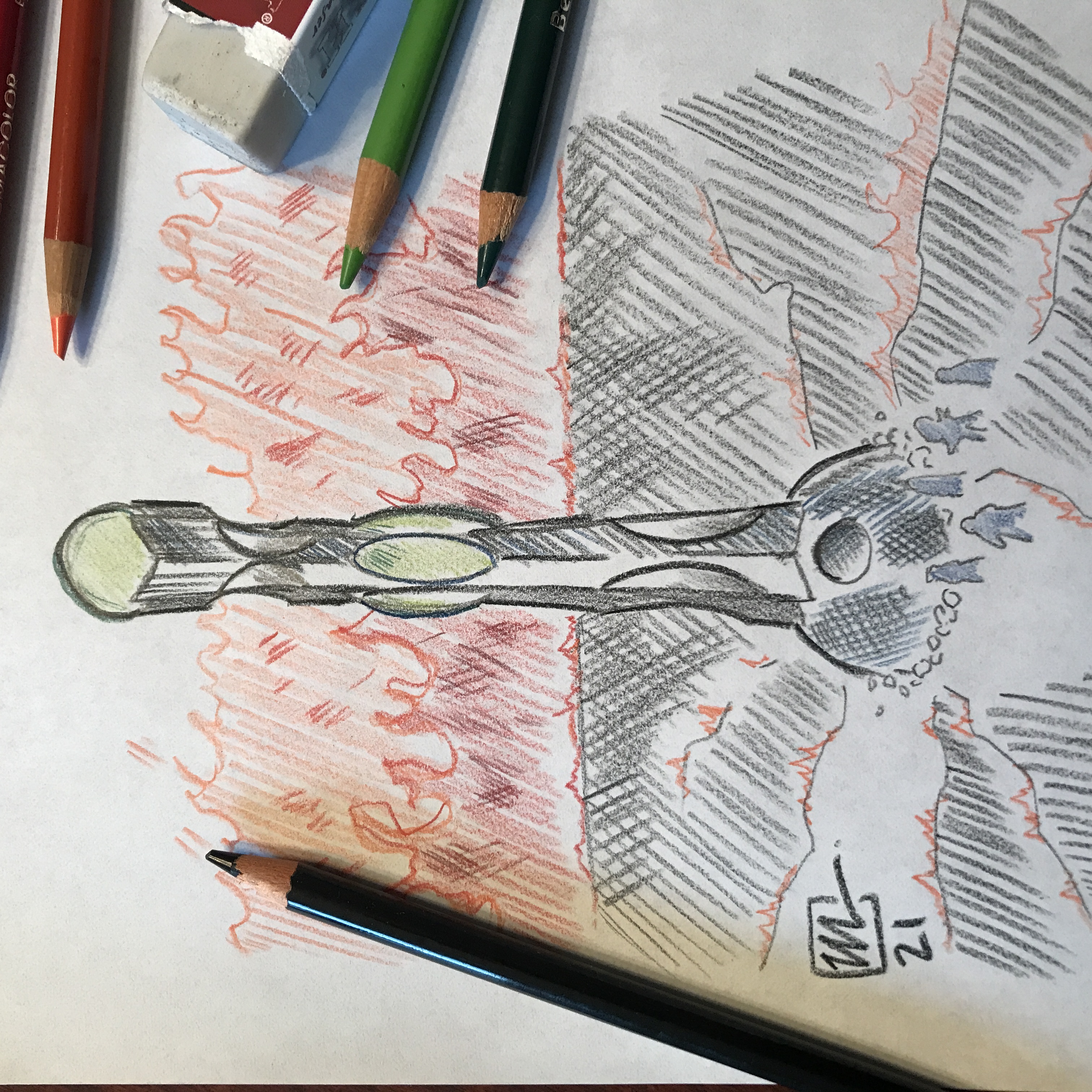 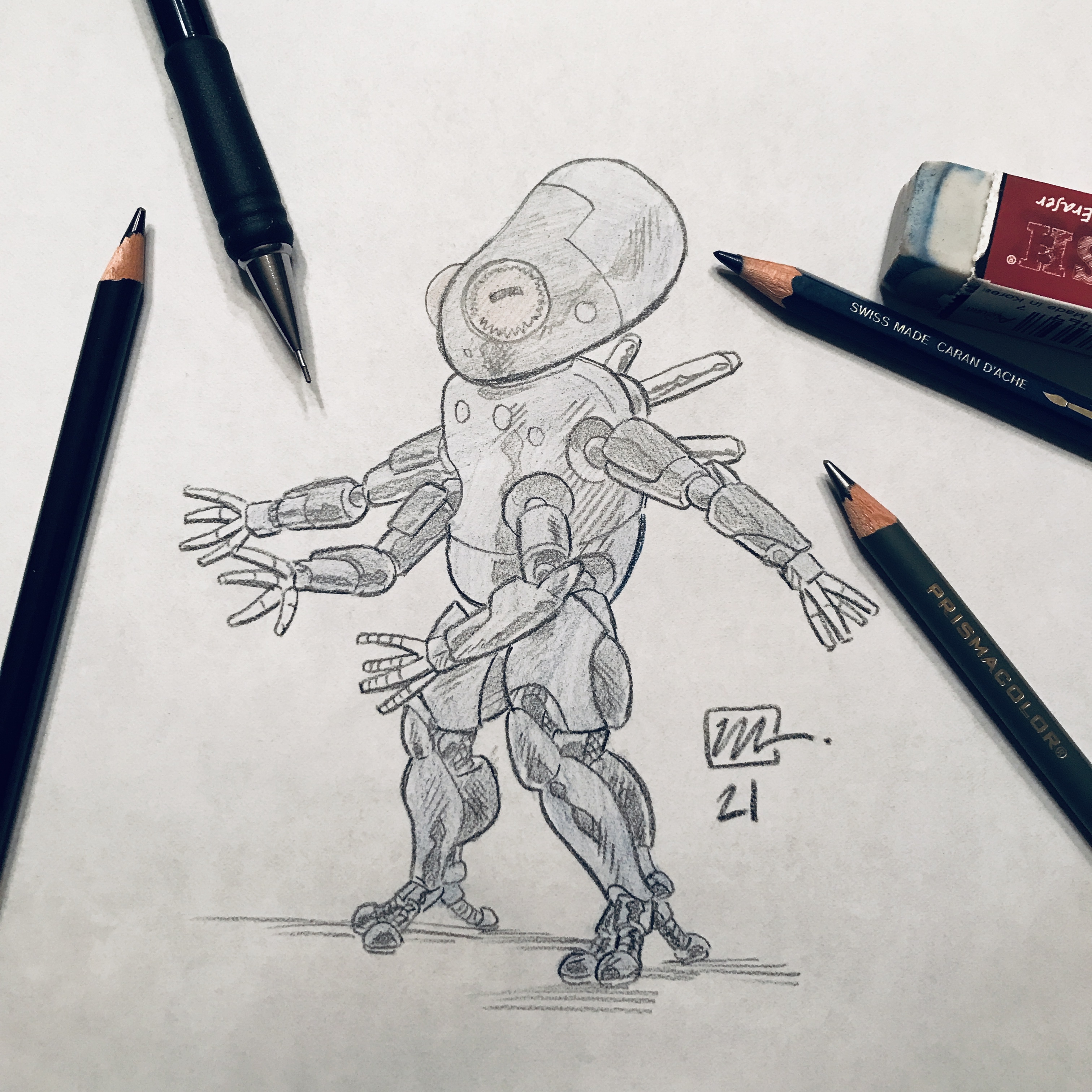 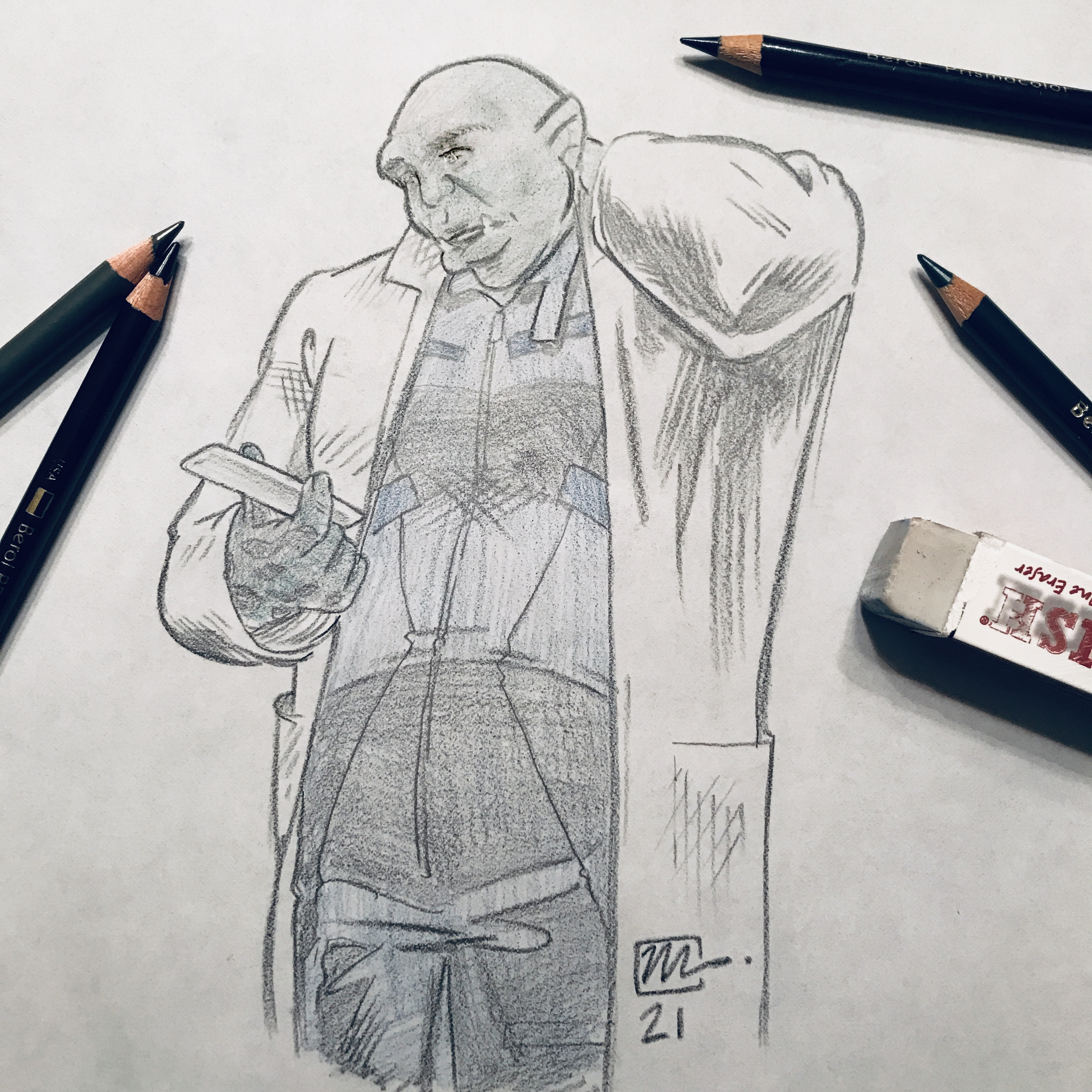 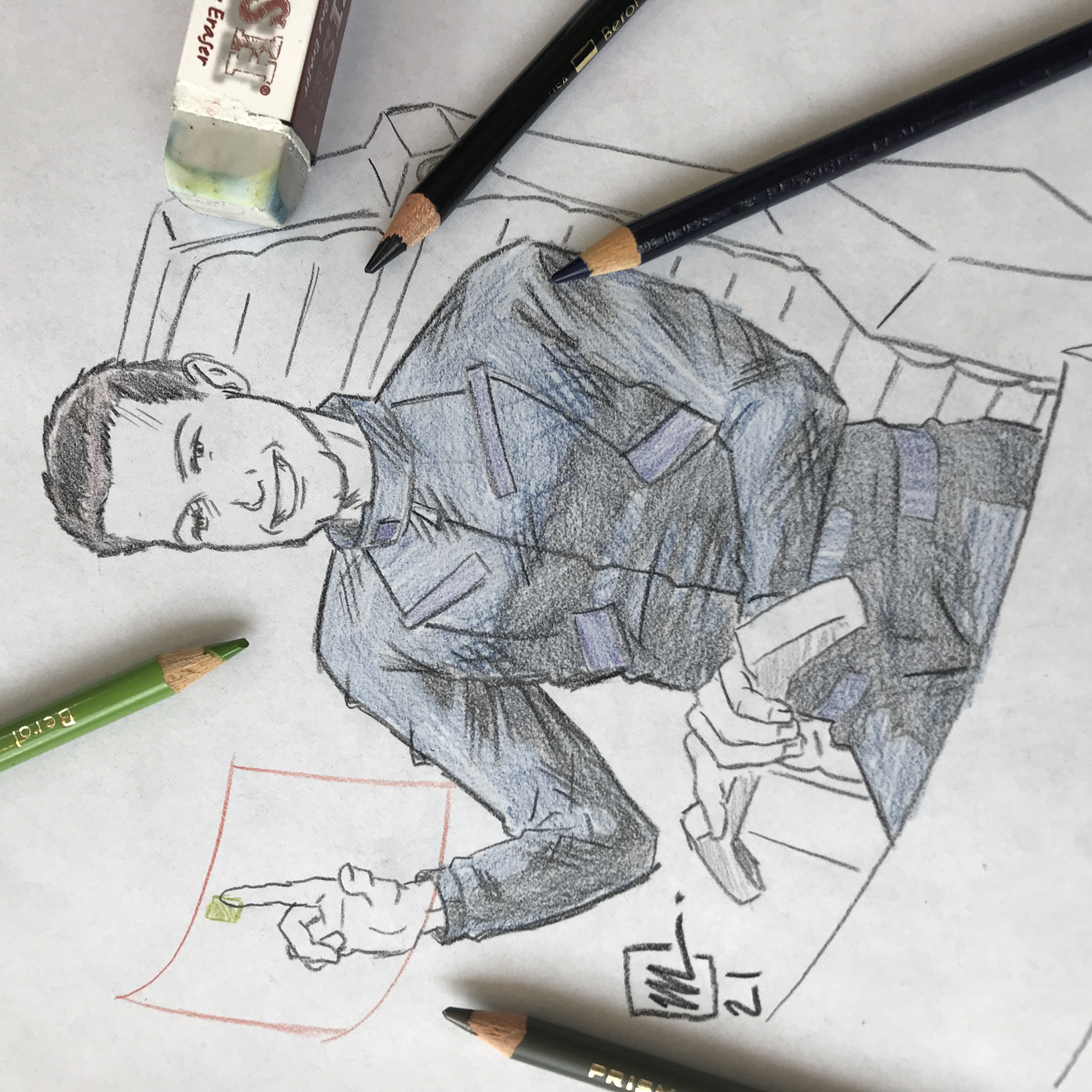 Checkout the Latest Comic I Wrote!

Set across five different comic book worlds, United Forces Crashover is a fun, fish out of water, interdimensional adventure. The Crashover Mini-Series is, Bill & Ted meets the Into the SpiderVerse, mixed with the unpredictable turns of Rick & Morty; and for good measure add one portal and one demon to get an Avengers Endgame conclusion shot through the lense of Army of Darkness.

Check out the campaign

United Forces; Crashover, part one of a four issue limited series was the brainchild of Gary Dufner. Gary asked a few guests who's comics he liked if they would collaborate on a comic. After they said yes, Gary asked me to write it. The novelty of a one issue fun-fest gave way to the intention of telling a big story in a limited run.

Against convention we ran our Kickstarter campaign from Thanksgiving to Christmas and reached 136% funding. We've also connected five different comic reader groups to build each creator's fan base. So far, so good. Issue two is already in the pipeline with a new group of creators to carry on the Crashover storyline as it thunders toward a never before seen conclusion intended to entertain the readership of thirteen different comic books!

I have my professional fingers in writing, design, and illustration, but my interests range far and wide. Comic books (obviously), backpacking, bocce, skiing, reading, fly fishing, film, competitive shooting, wood working, economics, anthropology, and travel—to name a few. So, what feels like eons ago, I started The Burnbox. A repository of my thoughts and interests. Social media supplanted this as my chief outlet, but I'm correcting that. I've moved as many of my old posts I have here and will add to them with some renewed frequency. Enjoy!

Check out the blog